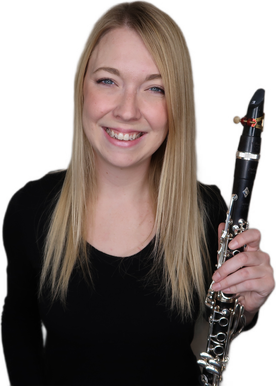 ​Cally Laughlin is a clarinetist based out of Chicago, IL. She is principal clarinet of the Racine Symphony Orchestra, a member of Lake Effect Clarinet Quartet, creator of Cally's Clarinet Channel on YouTube, and the clarinet instructor at Whitney Young Magnet School and York Community High School.

​Cally was appointed principal clarinet of the Racine Symphony Orchestra in 2021, under the direction of Pasquale Larino. Prior to her appointment with the RSO, she was a member of the Civic Orchestra of Chicago from 2016-2018. During her time in Civic, she was fortunate to have had the opportunity to work with CSO clarinet coach John Bruce Yeh and prestigious conductors including Riccardo Muti, Christoph Eschenbach, Ken-David Masur, Marin Alsop, Teddy Abrams, Rossen Milanov, Joshua Weilerstein, Nicholas Kraemer, and Erina Yashima, among others. Additionally, she has regularly performed with various regional orchestras, including Quad City Symphony Orchestra, South Bend Symphony Orchestra, Elmhurst Symphony, and Chicago Arts Orchestra, among others.

She currently is a member of Lake Effect Clarinet Quartet (LECQ), a Vandoren artist ensemble who performs regularly around Chicago and tours the Midwestern United States. In the fall of 2020, LECQ was selected to perform in the Dame Myra Hess Concert Series, which was broadcast live on WFMT.  Additionally, LECQ recently released their first album in 2019, featuring works by Carl Nielsen, Percy Grainger, and Johann Strauss. Past honors of LECQ include a presentation and performance at ClarinetFest in 2019 and 2017, and a summer residency at Avaloch Farm Music Institute.

In addition to her work as a performer, Cally is a private instructor and clinician in and around Chicago. She is the resident clarinet instructor at York Community High School and Whitney Young Magnet School. Cally's passion for music and teaching inspired the creation of a light-hearted YouTube channel dedicated to a fun but informative approach to clarinet pedagogy and repertoire. Several of her videos and articles have been featured by Vandoren in the weekly issue of WAVE. ​During the COVID-19 pandemic, Cally started the weekly series “Clarinets, Cats, and Coffee,” where she gives viewers a tip of the week and an excerpt to practice. She has been interviewed by Sam Rothstein as a guest on the podcast “The Candid Clarinetist," and by Sean Perrin as a guest on the podcast "Clarineat."

​A native of Granite City in Southern Illinois, Cally moved to Chicago in 2005 to attend college at DePaul University. There she completed both her Master's degree in Clarinet Performance (2011, with distinction), and Bachelor's degree in Clarinet Performance (2009, cum laude). While At DePaul, she studied orchestral, solo, and chamber music repertoire in addition to clarinet pedagogy with both Larry Combs and Julie DeRoche. Cally also took lessons with John Bruce Yeh and Stephen Williamson during her membership with the Civic Orchestra of Chicago. While Cally's pedagogical ideas have been strongly influenced by her teachers at DePaul, she also had the pleasure of building a strong foundation during her high school years studying with Jeanine York-Garesche (St. Louis, MO). ​
Cally is a Vandoren Artist, with the Lake Effect Clarinet Quartet. Check out her setup!
Powered by